Getting addicted to game jams

I've done 7drl twice now. Recently I saw something about js13k. A JavaScript competition in only 13 KB? Sweet! JavaScript is my preferred language for this stuff, so why not?

Though not nearly as spartan as js1k (you're allowed to zip), the size restriction is still significant. Music, sounds, and sprites quickly push you out of the limit. And of course you're given only one month.

I ended up writing two games.

During the competition, I had seen this codepen. With a few tweaks, I figured it could be made more realistic and then decidely unrealistic, but awesome looking. 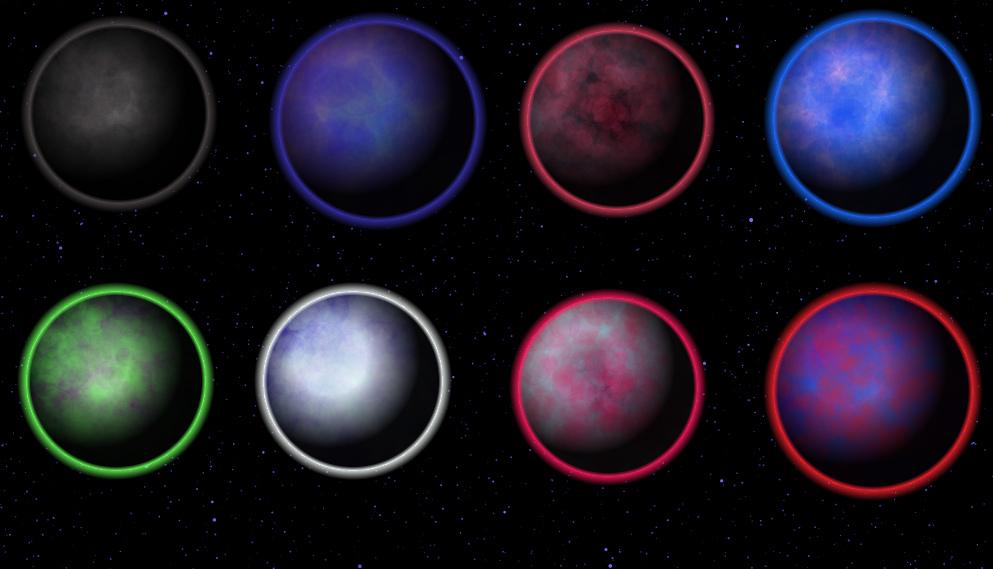 Basically, I had a planet generator and I needed to show it off. In MISSION, your goal is to find habitable planets and then convert the inhabitants to your religion. You're shown three planets at a time and you try to pick the one that looks the most habitable. I first imagined each planet having ratings next to them for four attributes:

Then I realized I could represent each of those visually (e.g. you can see how big the planet is and you can see if it has water). You still see the ratings, but only after you've already selected.

The theme of the competition was the four elements and I tied the four attributes of each planet directly to those elements. Additionally, while reading about missionaries, I came across this thing called the Wordless Book and added in a reference to it (though hilariously I managed to misspell it). Hopefully, nobody is too freaked out by the overtly religious theme.

Once you stumble upon a planet with intelligent life, you still face a few challenges before you can start converting and you have to manage a few resources. The game is probably not well balanced. After all, I threw together the gameplay in a single night. But it certainly does its job of showing you a bunch of neat looking planets. And it's the first time I tried to target mobile devices (plus desktop), which appeared to work okay.

Mission was sort of a throwaway. Instead, I spent most of the competition working on Particularism. Ostensibly, the game is a Tetris Attack clone. If you're not aware, Tetris Attack happens to be the best game evar!!! Totally unlike it's namesake, rows of blocks come up from the bottom of the screen. You swap blocks to make matches and try to chain them together to send gigantic "garbage" blocks to your opponent. Tetris Attack stars Yoshi and one of your opponents is a monkey that rides a dog. Yup.

In reality, Particularism is a rather serious game. I've wanted to make it for a while. The specific puzzle mechanic is a MacGuffin. It could be any mechanic, though Tetris Attack does hold a special place in my heart. As Particularism begins, the main character's father brings them a new game (Partic, as it were). You see, even though my dad was never really into games, when I was a kid we played a lot of Tetris Attack together and we kept playing it long after the SNES had been displaced by other consoles.

It's not even really about games per se. It's about trying to get good at something you care about, trying to stay focused on it in the short and long term, and the challenges and choices that naturally arise out of that.

Anyway, here's a few notes on hard to implement features:

With a few simple behaviors (don't let blocks stack up on the right, try to make combos on the left), it puts up a decent fight. The AI is visibly dumb in a few cases, but makes up it for in raw speed.

I thought for sure music was impossible, but this gist by Kevin Ennis was a life saver. Here's how I made it procedural:

Not every song sounds great, but a surprising amount do. Hey, that's procedural generation for you. Plus the plodding square wave reminds me a lot of the 8 bit era. You can play with the generator here.

There's different characters, levels, a set of 20+ emojis. I saved space by doing without animation, using small sprites, and keeping my number of colors extremely low. The majority of each level is painted using a floor tile, a wall tile, and some gradients on top.

Don't bring a drama to a comedy fight

I made a short film in college called Proxy. It was embarassingly bad, so I'm not going to link to it. It was made for a competition where you had to make a 5 minute film in 1 week (the similarity to a game jam has not dawned on me until this moment). At the end of the competition, dozens of films were shown back to back. This is the worst possible format to release a serious short film. We were all amateurs, so the sound on everything was awful and in my case they didn't turn it up loud enough to be audible. The start of one film was shown the second another ended, before any laughter or applause had subsided. That day made me understand why movies have opening credits. You need 5 minutes just to ease into the mood of a film. If you only have 5 minutes, just do a comedy.

Ok, so why am I rambling about this? I think I've decided a game jam is not a place to bring up a serious game. The audience, mostly other devs, and the judges have over a hundred games on display. It's like a stack of 100 resumes. Impress me quickly or you'll be in the trash. Hmm. Maybe I'm being cynical here. js13k was a hell of a lot of fun, but I think next year I'll do an action game.